A national reckoning with racism, combined with the economic damage wrought by the pandemic, is prompting some state and local officials to take a closer look at an issue that has long bedeviled Black homeowners: inflated property tax assessments.

Several recent studies and investigations show that, racially motivated or not, many tax assessors still routinely saddle Black and minority residents with property tax bills that are too high given the value of their homes.

With millions out of work and the economy sputtering, some cities and states have approved temporary property tax breaks to help people avoid tax delinquencies and foreclosures. Others, prompted by the recent protests, are taking a deeper look at the racial inequities baked into system.

“People are starting to think about this,” said Paul Bidanset, project manager at the International Association of Assessing Officers, a professional organization that develops guidelines used around the world. “Assessors have tools to measure any inequities in their assessment and correct them.”

Many historians and housing experts say the conversation is long overdue.

“We’ve seen these moments of crisis bring structural changes,” Andrew Kahrl, associate professor of history and African American studies at the University of Virginia, said in a phone interview. “What those will be, who knows?

“These are forms of structural racism that are very invisible,” he said. “It’s subtle. It’s insidious and happens in ways the victims themselves aren’t aware of.”

Because property taxes are assessed locally, Kahrl said, there hasn’t been a national movement for change. And the job of demystifying the opaque assessment process usually falls to city auditors and local reporters.

Furthermore, any effort to lighten the property tax burden on minority homeowners might run into resistance from local officials desperate to recoup tax revenue vaporized by the downturn.STATELINE STORY October 3, 2019Talk of Reparations for Slavery Moves to State Capitols

Cornell Brooks, a professor at the Harvard Kennedy School of Government and former president of the NAACP, noted that in the aftermath of the Great Recession, many localities became more aggressive about seizing and selling properties with unpaid taxes.

“All this points to the broader problem: Local governments for decades have been starved for revenue,” Brooks said in an interview. “And the way they’ve responded has made the problem worse for the most disadvantaged.” 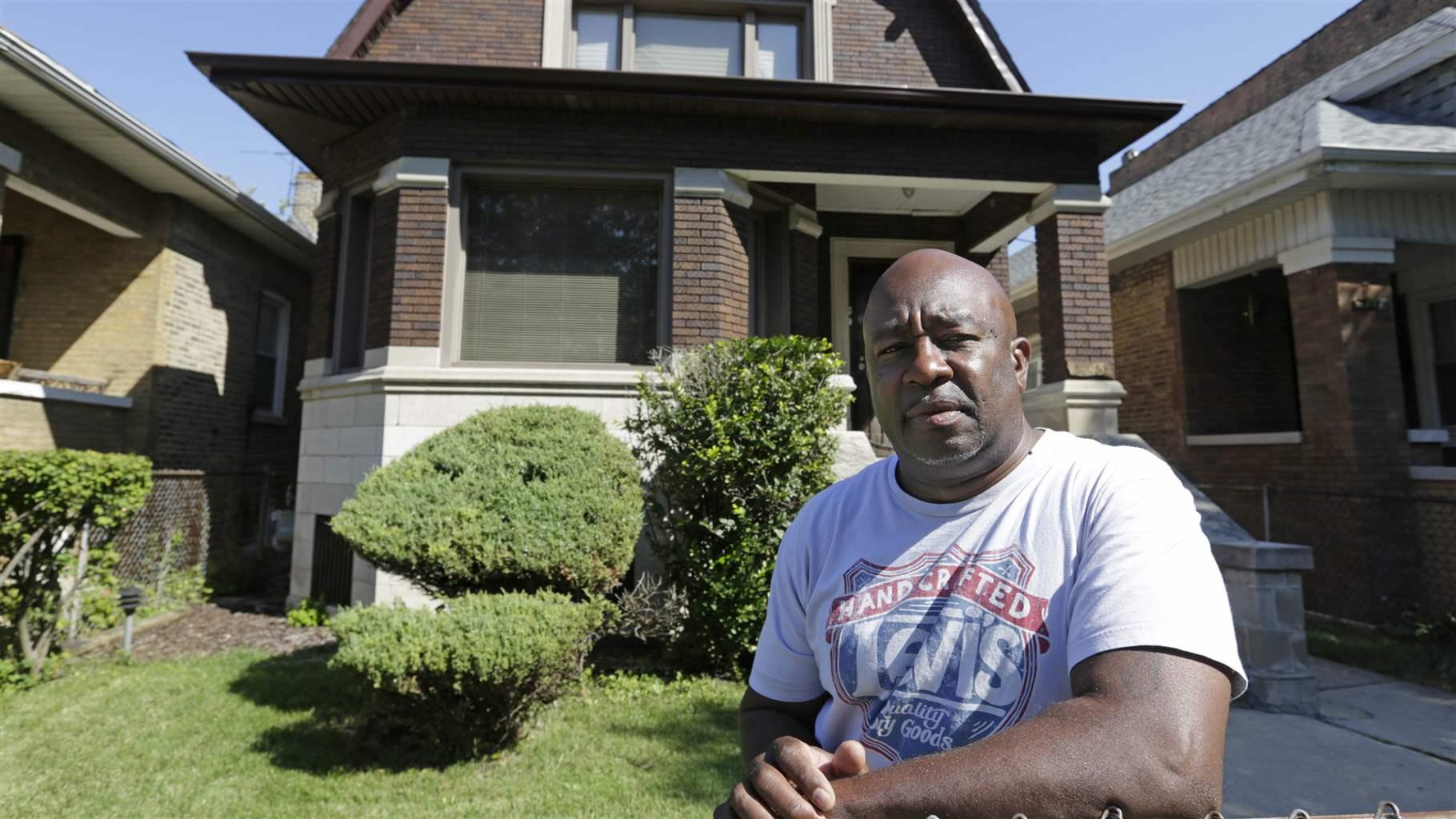 Chicago resident James Young stands outside his home in the Auburn Gresham neighborhood in this file photo. A Chicago Tribune report in 2017 found the city’s property tax system placed an unfair burden on poorer residents of minority communities.

In 2017, the Chicago Tribune published a series of stories on the Cook County Tax Assessor’s Office, finding that for years the county’s property tax system had given huge financial breaks to homeowners in wealthier and largely white communities while placing an unfair burden on poorer people living in minority communities.

The newspaper blamed the county assessor’s flawed system for valuing properties, not overt racism, for the disparities. The result, however, was that people living in poorer areas, many of them minorities, tended to pay more in taxes as a percentage of their home’s value than residents of more affluent areas.

In 2018, an investigation by the Philadelphia Inquirer and the Philadelphia Daily News found that homes in that city that sold for between $25,000 and $50,000 were assessed 70% higher than they should have been, inflating the tax bill for a $37,500 home by about $360 annually.

At the same time, the owners of more expensive properties got significant breaks. Homes that sold for between $1 million and $2 million were assessed at nearly 11% below their actual value, resulting in tax bills that were $2,000 less than they should have been.

A subsequent report by the city controller concurred that homeowners in Philadelphia’s lower-income, majority-minority neighborhoods “are likely paying more than their fair share of property taxes.”

In February, the Center for Municipal Finance at the University of Chicago Harris School of Public Policy released a review of property assessments in Detroit between 2016-2018, finding that the property tax burden fell disproportionately on the city’s lowest-income homeowners.STATELINE STORY October 3, 2018This City Wants to Reverse Segregation by Reviving Neighborhoods

New Orleans also has faced criticism over its property tax assessments. A March report by the Louisiana legislative auditor found that the Orleans Parish assessor failed to appraise 18% of the residential and commercial properties that it should have reappraised in the 2020 tax year, and had conducted “land-only” reappraisals of 38% of properties, instead of including the value of the building as required by state law.

The section of the city that wasn’t assessed was home to the wealthiest properties in New Orleans, said Broderick Bagert, a lead organizer with Together Louisiana, a statewide network of more than 250 religious and civic organizations that is pushing for big changes to the tax assessment process in the city.

“It means that the poorer you are, the more your property taxes have gone up relative to the value of your house,” Bagert said in an interview. “This is not just an abstract fairness question. This is a question that can impact whether people can stay in their homes and stay in the city.”

The problem extends far beyond that handful of cities, according to a report released this month by the nonprofit Washington Center for Equitable Growth. The study found that relative to market value, assessed property values are significantly higher for minority residents nationwide.

Within the same tax jurisdiction, the researchers found, Black and Hispanic residents on average bear a 10% to 13% higher property tax burden than white residents. One reason for the disparity: Minority homeowners are less likely to appeal their assessments, and less likely to win them when they do.

In an interview, Orleans Parish Assessor Erroll Williams bristled at the notion that assessments in New Orleans are unfair to minorities.

“There’s no racial disparities when it comes to the process,” Williams told Stateline, adding “I’m a Black assessor. … Fair market values are what we chase. We don’t care who owns it.”

“If your system is flawed,” said Avenancio-Leon, an assistant professor at the Indiana University Kelley School of Business, “even if it’s race-neutral, you still have systemic racism.”

Walczak cited rules in many cities and states that cap the growth in the assessed value of a home, allowing a reassessment to full market value only when the home is sold or significantly transformed. That relieves incumbent property owners, who pay far lower effective tax rates than their neighbors who purchased homes more recently.STATELINE STORY April 11, 2018Pursuing Desegregation in the Trump Era

Partly because of the racist policies of the past, those who have lived in their homes the longest tend to be older, wealthier and whiter than more recent home buyers, he said.

“Policymakers should be aware that these policies pick winners and losers,” Walczak wrote in an email. “For everyone whose home’s assessed value is artificially low, someone else is paying more — a policy that often penalizes younger and lower-income families, and sometimes particularly people of color.”

“You’ve got to protect the people who are on the low end,” Williams said.

Chicago offers a glimmer of hope, according to Aneel Chablani of the Chicago Lawyers’ Committee for Civil Rights, which represented three housing organizations in a 2017 lawsuit alleging that Cook County Assessor Joseph Berrios violated state and federal civil rights and housing laws by producing assessments that were unfair to poor and minority homeowners.

In 2019, the plaintiffs agreed to dismiss the lawsuit after Berrios’ successor, Fritz Kaegi, increased transparency and made other changes, including ordering an external audit of his office, pushing for automatic renewals of tax exemptions for older residents, and improving the appeals process. The Cook County Assessor’s Office also has begun using digital images of properties taken through aerial photography.